Do you know what God calls you?

No. Not my Jesus. We know better. But if we know better then why do we so often get stuck so deeply when we hear these? Why do our shoulders stand with the slump of disbelief?

If you are living and breathing you have probably heard at least one of these told of you in your lifetime. And if you are a woman, there’s a good chance you are still carrying that bit of baggage like a dead weight. Yes, unworthy is sexist, and it’s time for you to see who you truly are. Who God says you are.

I’ve never felt that I lived in the shadow of anyone in particular, but as the daughter of a well known musician in my hometown and the youngest of four it can be hard to leave your mark. Truth be told, it came a little easier as my hair grew larger. Like a happy side effect.

I have always been so and so’s little sister. His daughter. Her daughter. His wife. His mom-her mom. Ever feel that way? Like your name has been forgotten, even by you. “Hi. I am Elijah’s mom.” I perpetuate it myself.

I love being Elijah’s mom. I wouldn’t trade this title for anything. I LOVE being wife, daughter, sister, friend. All of that. You probably wear most of these same hats and love it the same as me. The name I mean is bigger than any of these.

God’s name for you. 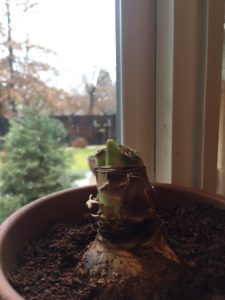 I have this little guy in my window sill of my kitchen, perched just above my sink of dirty dishes. It’s an unbelievably real life comparison to what I see and what God sees when he looks my way. I see too dirty, too mundane, too messed up, to much and not enough of all the wrong things. But he doesn’t see my dirty dishes.

He sees the possibility. He looks and sees my entire timeline from start to finish. Bulb to flower as it breeches the dirt and claws for air. He sees what amaryllis means in its origin. Amaryllis translates from the Greek as “sparkly.”

Sparkly. That’s what God sees when he looks down at our tiny steps in his direction. It’s what he sees when he catches us down on our knees handing over control. Our marriages. Our babies. Our adult children. Our past, present, and future. The impossible dreams he has placed deep in us.

He sees sparkly. He sees warriors and a firm stance atop the dirt. Right smack dab in the middle of a drab winter day or harsh January storms. This is where the amaryllis blooms. One of the few of its kind. It pushes through and stands radiant, not weathered. Not beaten down. Its petals are raised up, right to the heavens anticipating the smallest bit of sun.

“Joyful are those who listen to me, watching for me daily at my gates, waiting for me outside my home! For whoever finds me finds life and receives favor from the Lord.” Proverbs 8:34-35

He’s asking us to push through. He’s asking us to listen, to obey, to put one tiny foot in front of the other and cast off the dirt that has smothered us for too long. Dirt he never put there. Filth that an enemy poured heavy over our shoulders with simple spoken words.

God calls you amaryllis. It’s time your shoulders reflected that.