It’s nearly 7am on September 11. 7am is when my sister by law called and woke me. We had two and a half kids then, no dog. My husband was already at work, and I am pretty sure I had been up on and off in the night with babes.
We watched the repeat footage of the first plane crashing into the first tower, still under the impression that a terrible accident had occurred. Our programing was interrupted with news and footage of the second tower crash. She said, “This seems bad.” Hind sight.

I cried. I got my kids settled with breakfast and my husband came home. I cried. I watched the news in my room on and off, but I am typically anti the news, and I don’t let my kids watch it, so I went about my day as usually sneaking a peak every now and then hoping for new news. Rather than spending my night teaching bible study as I had planned, our church gathered for a prayer vigil. The pastor asked people to stand if they had a loved one or knew of someone still unaccounted for in a crash or New York or the Pentagon or  Pennsylvania field. There were very few people left sitting.
The next day, The Man got a call from his boss saying their company had been asked to fly to New York to set up the computer networking needed for the Red Cross. My first thought was NO WAY. My second thought was, “I am pregnant with baby number three, and there is no way he is flying.” Then I thought, “NO.” I finally came around to remembering God is in control of my husband and his life. So, he got on a plane and flew to New York. Because the disaster was much greater than anyone foresaw, he didn’t get to do much. He was home in a couple of days and clearly in one piece, but if you have never had to experience sending your husband on a plane INTO a crisis, say a quick thank you prayer. I do not recommend it. 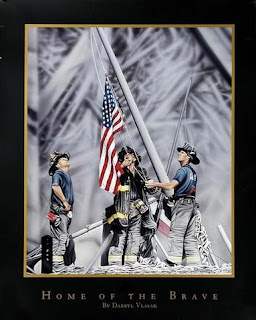 Tomorrow morning my husband, the fire fighter, is participating in a remembrance of the fire fighters killed that day. That’s a sad way to start a morning.
All this to say, “Where were you?”