Skip to content
So, tonight I was listening to a guy named Philip De Courcy, a very Irish fellow. He’s an excellent speecher, and looks not at all how I pictured him. He talked about where we get our orders. Most of us have more than one order giver in our lives. If you are married, sometimes the directives come from the spouse. If you have a toddler, you know that you find yourself taking orders now and then before you realize that tiny turkey is not the boss of you. And if you are a Christian, even if no one else knows it, you get your order from God.
My advice is that you listen and obey. However, my example on the matter thought it was Opposite Day. (Why my auto correct changed the capitalization on this made up holiday, I do not know. But I often think it should be a day and I am keeping it).
Anyhow. My example is to doubt. To second (and 3rd and 4th) guess what I think God said. Especially when I don’t see anything working in what I feel is the right direction. You know what else I learned about myself?
I sometimes try to quit people before they quit me. I close up. I build a wall faster than Nehemiah if he had two good arms, and I bunker down inside where it makes me feel better if I quit first.
I have this idea God gave me. When I was a kid, until I was well into high school, if anyone asked me how many kids I wanted, I would calmly reply, “10.” I wasn’t kidding. Then I met my only child husband, and plans changed. Sort of.
As you can see by my seriously awesome pictures, I have five kids. If we are getting personal, I have three babies we don’t talk about often. It’s not as raw, but it still hurts. We lost three little peanuts. I never asked God why. He was ready for them, and it doesn’t change the status of their parents. Those are my three babies. Even if they never lived outside of my belly. So I have eight kids.
And about three years ago, I felt like God dropped a nugget of desire in my lap that we should consider adopting. There is more to this story, but it’s not the time for that.
I dreamt of a little boy. Since then, my husband teeters on the edge of hysteria and crazy enough to happen depending on his day. Also, he threatens sincerely to steal our friends’ adopted blondie little girl. He wants to have her over for dinner. He wants to buy her presents. He cries like he is her daddy when she sings on stage or burps the alphabet. He won’t admit it, but I think he secretly wants another girl.
I say we both get our way and we add two more brewers so we can reach that magical number, 10.
I declared it. Not like bankruptcy. Like full of faith. Like Joshua giving orders to the sun. Like Jesus yelling for Lazarus. Like my six year old hollering “CAN SOMEONE PLEASE BRING ME TOILET PAPER?!” Loudly. With strength. With conviction. I wrote about it. I prayed. Fasted. Held tight to promises.
And three years later. Nothing. Except my unfulfilled desires. Oh, and nearly everyone I know gets to adopt. But not me.
My heart wants to quit before this dream quits me. What if it never happens and then I just look like a fool?
Philip De Courcy. He talked about the soldiers guarding the tomb of the unknown soldier in Arlington Cemetery. I’d imagine it’s even more emotional than the regular cemeteries. I’d like to go there and watch the changing of the guards. Because these guys know their orders. And in the same way God is so faithful to bring reminders and keep his will heavy on our hearts, so do the guards. They are guarding the remains of soldiers from two different wars. These men couldn’t have a tombstone like everyone else because we never knew their names. Just their bodies. We brought them home and put them in this tomb which is protected night and day. Always.
The soldier walks 21 paces. Turns and pauses for 21 seconds. Then he walks back the 21 paces to his starting point. He does this repeatedly until it’s time for a changing of the guard.
When his replacement comes, after the new guy carefully inspects his weapon, he asks “what is the directive?”
The soldier says,”post and orders remain as directed.” Every time.
It’s what God is saying to each of us really. Just about different things. Mel Gibson gave his own spin on this phrase in the movie The Patriot. “Stay the course.”
Remain as directed.
Stay the course.
Because there may be pain at night, but joy comes in the morning. And God’s fulfillment.
I am grateful for my work while I wait. I am grateful for the ways God is preparing me every day. I am grateful that my work is not as monotonous as the soldiers in Arlington Cemetery, no matter how noble that job is.
His boundaries for me have fallen in essential places (psalms).
Remain as directed.
Stay the course.
Amen. 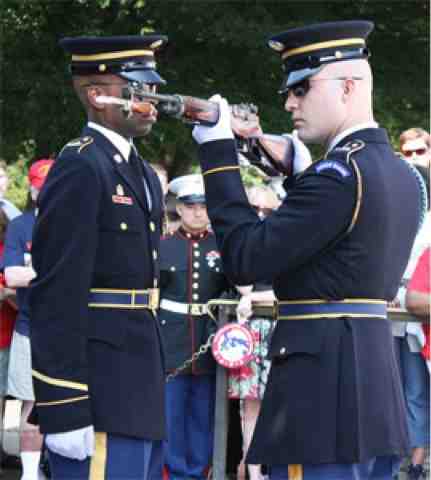