Do you guys do this thing, where you pick a word for the year? I’ve done it for the past several years. A lady I knew was reflecting on her previous year and the word that went along with it. Seemed to make sense, so I chose a word. This year I have chosen the word 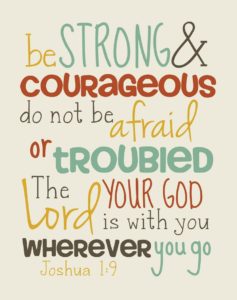 Worst mistake of my life. You know all that’s happened since I prayed about my word? Since I innocently looked to God and said, “Hey, do you have a word for my year?” and he answered with, “Heck yes, man. You gotta be COURAGEOUS!” (Sometimes God speaks surfer.)

All that’s happened since that fateful moment are opportunities to be courageous when he KNOWS I would have taken the weenie way out! What kind of messed up system is this? I asked to BE courageous. Instead I seem to be proving to myself, on repeat, that I am not at all, in any way, courageous. Awesome. Just super.

Tell me something I don’t know. But then, maybe these aren’t the truths about me. I’ve done some pretty crazy things in my life. I’ve stood up for kids when I knew it would be followed up with a punch to the face or a threat to my reputation. I have moved several places without knowing anyone. I’ve had some kids. I’ve moved my life and started over completely with just my husband, our kids, and a dog who I now know I was severely allergic to. So he was actually not at all helpful.

Maybe I am not courageous in myself, but maybe God has come in and picked me up by my (Bootstrap’s) boot-straps and said, “This is who I say you are. Stand up. Take a step. Be strong. Be courageous,” and because he is there, with his arms propped under my armpits as I slump and pout in true two year old fashion, maybe then I begin to be courageous.

Perhaps all I had to do was agree to let him lift me up. And suddenly it’s not the weight of me or the strength of my legs which holds me firmly. It’s him.

When I think back on it, he hasn’t ever asked me to do anything too crazy and then took off running.

[side note: my brothers have done this. When I was little they would say things like “put this trench coat on over your clothes, run out into the living room and stand in front of the TV our parents are watching, and flash them. We will run in after you.” Little did I know they were using mental air quotes for “run in after you.” What they really meant was we will hide in here while our parents add a little note to their mental list of ways our youngest child is so bizarre.] This isn’t an isolated incident.

[Because one time when I was like 7, my oldest brother (14 ish) called me outside. He was on the roof. The forbidden place. My parents were gone, so naturally my brother needed to be on the roof. He said, “Hey. I have a bunch of water balloons up here. Climb up that ladder and we will call the boys to come outside and we will throw these water balloons at them! I will let you be on my team.” Again, with the mental air quotes where within they meant, “I have no balloons. Once you get up here to the roof where it is forbidden, I will climb down, take away this ladder, and leave you stuck up here until our parents get home. Then you’ll be in trouble for climbing on the roof. and by team I meant the team I have created that is a loser.”] Seriously. I need to learn to speak air quotes or I am doomed.

God isn’t this way. So what is it? Has he called you to something? Were you supposed to step out? Are you standing behind some invisible fence (sometimes known as chains)?

Is there a word that he’s bringing to mind even as you read this that encourages you to chase after that thing or remain still and in his presence while he works out some things?