Yesterday was a big emotional day for a lot of people. So much anticipation and angst. I watched tears of sorrow and some of relief. There were cheers and chants. There is more hatred and weird than I have yet seen in my 6 months on Facebook. But none of this is the most important thing that happened yesterday.

Teachers in Washoe County went to work as usual yesterday, except to face no students. It was a day of training. We got a whole hour for lunch, instead of the usual scarf your food while you get ready for the afternoon 30 minutes.

We took a slow ride to Red Robin and just attempted to enjoy ourselves. About five minutes after our waitress delivered our food, I hear crying and shouts. I hear a squeal of excitement, “DADDY!” 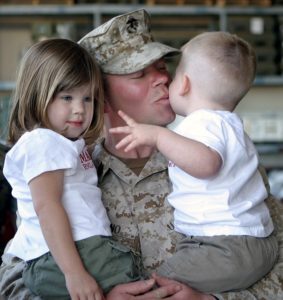 Three young kids and their older sister jump from their seats and swarm around a uniformed man apparently just returning from deployment. He crouches in his camo, yanks his hat off, and throws his arms wide so each of his kids can get back to the place where they belong. They sit like this for at least 10 minutes. Just crying and saying I love you at least 100 times.

People are recording the moment. Others are taking photos. The entire restaurant is silent. For at least 5 minutes we can’t talk; we can’t bring ourselves to pull our eyes away or speak above a whisper. Many in the restaurant is crying.

It’s heavy and heart wrenching and wonderful and filled with pride. We were beaming. We were witnessing what is so right with our country. On the day of an election that so many were heated over and losing friends over, this family, this soldier and his babies showed us what is so right about being American. Where our focus should be.

Because you know what? Just like that soldier spread his arms and gathered up his little ones, so does God. He’s thrown his arms wide. He wants to pull you in where you belong. You don’t belong in the security of a presidential election. You don’t belong snuggled up to a political party. You belong to God.

Let’s choose to be the peacemakers today.