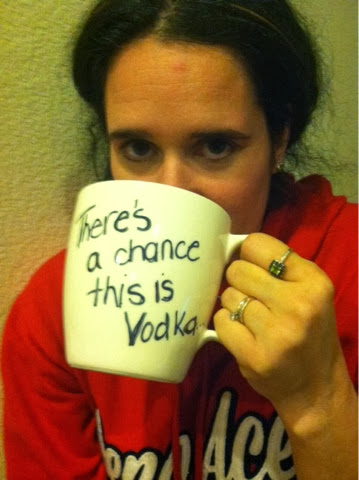 So. This picture is funnier if you know me. While there IS a chance I woke up this morning and decided to fill my mug with vodka, there is also the chance that I haven’t had a drink in nearly 15 years. One day I prayed about alcohol. God said it’s not for me. I’m the designated driver, the videographer when your night’s gone awry, the one who whispers “take it easy” so they’ll let you back in this establishment. Oh. No. It’s ok that we started the night as strangers. I’m a community helper and a lifetime mocker. It’s what I do. I make mock. So, by all means. You do what you gotta do. But let me get my camera first.
I have a dream that one day I’ll post a video that will go viral. You might just be the key to that dream come true.
Before we get too far, I made this mug with a sharpie, a mug, and my oven. I washed it once and it’s nearly all disappeared. I have a dream that I won’t be mocked by Pinterest and their crafts.
I have a dream that I will stop answering the phone in my half-asleep. It’s as if I don’t know I can let the machine get it. Er. You know what I mean. One time, yesterday, I picked up the phone at 8:30 in the morning. It was a complaint. It was painful and irritating to sit through, and I’ll be honest, it took me too long to stop attempting reason between her barrage of eff words. I should have refilled my mug and sat that one out. Instead I tried to help. Idiot. Another time I answered the phone at what can only be described as where Jesus’ praying hour and satan’s play date meet. 6am. It was my sister. I was pregnant and on bed rest so she deserved what came next. I answered the phone and spoke “you have reached Mike and Shontell. We can’t come to the phone right now. Please leave a message after the beep.” Then I pushed the number seven for a while.
I have a dream that airline tickets and house prices will drop considerably for the 15 minutes I mean to purchase both. Is it too much to ask? One house, 6 bedrooms, a basement, an acre or eleven, and two dishwashers. Plane ride to Missouri. Juneish. Because someone is marrying her lobster. Click.
And finally, I have a dream that Christmas will be about something that matters. I don’t even care what that means for each person. Christ, family, forgiveness, reunion, laughter? As long as it isn’t about Walmart and their commercial campaign this year. Kids screaming and jumping up and down because they can finally feel happy now that they have this toy! I cringe when I see this commercial. I want to hug those kids and punch their kittens and say something profound to all of Walmart. I feel like this last one will have to remain a dream, except for in myself. I have a dream that I will be Michael Jackson and start with the man in the mirror.
Wanna stand next to me? What’s your dream? Everyone who comes to Hollywood has a dream…