Have you ever been called to something straight scary? Maybe you heard from God, and you jumped, and now some time has passed and you find yourself still as a statue. Full of doubt?

Maybe he said something like, “start this ministry” or “go to this country.” Maybe he went super crazy and he said, “start this business,” or “become a pastor” or my personal favorite deranged message, “write this book.”

I’ve done it all. I’ve taken steps. I asked for the accountability. I asked for prayers and even had people I hardly know approach me and say they heard from God. “Write the dang book.” Not everyone here can be a John the Baptist- believing sight unseen. Wearing crazy hairy tunics and eating weird bugs just to be a little closer to God who would soon send Jesus. Some of us are more like Paul. Or Peter. Or Carl. Oh, you don’t know Carl? 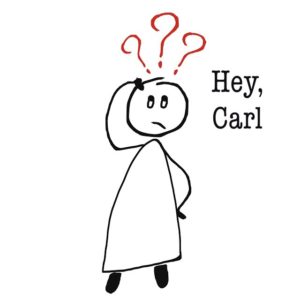 That’s because he didn’t show up in the Bible. His story goes something like this.

Meet Carl. Carl loves Jesus. One day, God spoke to Carl and said, “Hey Carl.” and Carl spoke back and said, “Hey God.” And they sat in companionable silence. After a few minutes, God said, “Carl, I have a desire for you.” And Carl, obedient, wanted to please, so God’s desire quickly became his desire because secretly deep down it had really been Carl’s desire all along. Probably since he was a little Carl.

Carl had a hunch that God put that desire way deep in his guts so early so he would be ready when God was ready for Carl. So Carl cheered. He threw his hands in the air as if he doth careth not and said, “Hey God. I’ll go/do it/surrender.” (This is a choose your own adventure so feel free to choose which word or phrase suits you best). And he went. Carl went. He planned, he packed, he told people what God was calling him to.

He sent letters and asked for prayers. And then Carl got busy/distracted/received a rejection pertaining to his goal (again. You choose your adventure). So Carl sat. And soon Carl realized he had been sitting for a decade. Yep. A whole decade.

Carl was married now. Kids. Steady Career. But that little nudge never left him. If anything it grew stronger. 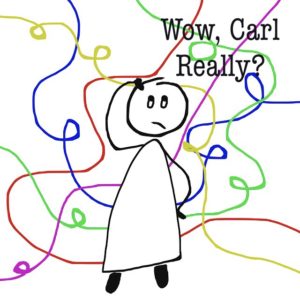 (A Lemony Snicket sort of interruption- Now, I know so many stories have a happy ending. But this isn’t most stories. This is Carl’s story, and Carl didn’t make it into the Bible. Remember? So if you are going to lose it, I suggest you stop reading now. But if you are terrified of being Carl, keep reading and learn from him.)

Carl decided that God was wrong. He decided he cared more about being comfortable and never facing rejection than he cared about obeying God, so he came up with a new story when anyone from his past would ask about that once big dreamy desire for his life. “I heard God wrong. Or is it wrongly? More Wronger? I don’t know, but I was incorrect. God sent someone else.”

Carl isn’t totally wrong. God did send someone else. But first God chose Carl, but Carl said, “no thank you” with his actions, so God sent someone else. Because God’s will isn’t to be thwarted. And do you know who God sent instead?

Someone who was willing to wear humility like a prize because mistakes means they tried. Someone who stood before the raging seas and instead of saying, “God, I heard you wrongly,” they said, “God, you called me and I trust you to handle this.” And they stepped. Right into that scary, terrifying water.

And God, because he is the same yesterday, today, and forever, God parted those waters. And because he is the Almighty, when Carl’s replacement looked down, he realized the floor beneath his feet was dry. Totally dry. God didn’t leave him to trudge through the muck and mud. God didn’t just show up a little bit. God delivered more than his wildest dreams. He just wanted to cross safely. God wanted him to live life to the fullest all the while giving glory to God alone.