There’s this guy I met when I was just a wee thing. I still resembled Olive Oyl, especially when I wore a bun. I fell deep for that guy, and we got married. And the rest, as they say, is history. Today we are doing a quick recap of this great story. A very quick recap. Here it is: 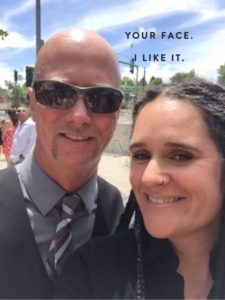 I was 16. He had comb across hair with shaved sides where his hair often hung down in his eyes. Just enough. He was 17 and a year ahead of me. He hung out over there, and I hung out in youth group. I wore ripped jeans and a The Who shirt. I had every song by Bad Company on vinyl, a black mail jeep, and I could hit a home run at the field near my house.

He drove a 1967 mustang-fully restored, built by his own two hands. He took pictures. I took pictures. He stood in my bay window and sang along to He Ain’t Heavy, He’s My Brother. So we got married.

That Handsome was way outside of my wheelhouse. He was so far from my familiar that at times I was even speechless. I had never, not once, knew a guy who gave me butterflies like this guy. I think I will keep him forever.

And now, a note on teenage dating.

Falling in Love or Falling into Familiar: a note on teenaged dating

I wasn’t much of a dater when I was a kid. I wanted to be married. It was my primary goal, and I knew who I would marry. Elvis. Young Elvis. Pre gold lamé. Never mind that the timeline made no sense and he died when I was one. I was in middle school. I knew best.
I listen to many teens talk about their significant others. I’m not going to lie- it’s a terrifying conversation most times. I’m working on my game face, but I’m not concerned that teens are dating. I’m concerned they think familiar is the same as love.
Maybe you’re of the “no trying on my daughter” tribe, and that’s fine. But most kids date. Each other. In circular fashion. And I need them to hear something.
Dear teens,
Who you are now is going to change. At least I hope so. Your frontal lobe isn’t even fully developed. Your boy/girlfriend right now, is also going to change. See above for reasons. If you are going to date. Take it easy.
I promise you that one day you’ll know love. So deep and so wonderful that your bad breath will be irrelevant in the mornings. So unconditional that someone will overlook them high waisted pleated pants and want to take you out anyway. So real you’ll put him or her first. Even before you.
But I also promise that if you have to justify a guy’s behavior some of the time, you’ll end up settling all of the time. And if that girl seems to not respect you or honor your boundaries, she won’t suddenly back off, she will lead you down paths you never would have considered. And they are dark.
You can’t love Jesus with everything you are and date a guy that’s high most of the time. You are made in God’s image. You are the temple in which he dwells. You will end up compromising. These two worlds cannot coexist.
Don’t tell me you love her and you’re so scared to lose her to explain why you’ve gone further than you planned.
It’s a lie you’re believing when you say you can handle that she drinks a lot, but you don’t have to. The more you are around that the more that becomes your new norm.
You call it falling in love, but really you are falling into the familiar. And what’s familiar is he usually can’t cope or be near your family or go out without smoking pot. This is how you know him. This is what’s familiar.
We all want familiar. It’s why gangs have existed for nearly all of time. We want a place to fit and look around and lean back and say “this is where I belong. It’s familiar”. So, sit back for a minute.
Remember that you have been beautifully and wonderfully made and God has an insanely big plan for your life. He doesn’t want you to miss a moment. He doesn’t want you falling into the familiar. He wants you rising up audaciously. 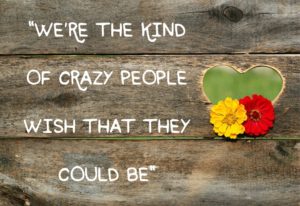 Quit settling for falling into the familiar. Fall in love with Jesus instead. When you do, you may find you end up being much better in a relationship, too. You’ll begin to know your worth, and you’ll have clear boundaries, and God will use you mightily and then, my friend. Then. You’ll be someone else’s familiar.
Only this time it will be busting at the seams with God’s love. That’s when you know it’s true love.

Thanks for being here to celebrate my birthday month! #shes40 I am posting everyday of October for the 31 day blogging challenge and giving you all the presents! Share a post on Facebook, and your name gets entered in to the mix for a prize- you won’t want to miss these! Share one post, you get entered into the drawing once. Share each of the 31 days, and you have 31 chances to win one of many goodies. Be sure to tag me in the post, so your entry does’t get lost in the algorithm vortex. Some affiliate links may be used.